TRADITIONAL AMERICAN RECIPE: For this Paleo Pumpkin Pie recipe you could use a 24cm / 9in pie dish, alternatively you can make two pies of 15cm. I personally bake two pies for Thanksgiving and Halloween, one regular pumpkin pie and one other flavor that I change every year, adding a bit of chocolate, or Vanilla Extracts.

If you have already perfected this recipe with the canned pumpkin ppuree, you might want to try to boil or roast a fresh pumpkin.

The crust for this pie can be either made with regular flour or almond flour. I like the almond pie, because it’s so simple and it doesn’t overpower the filling. Almond flour crusts, like anything made with nuts, can burn easily. So keep an eye on the crust and if it looks like it’s getting too brown, cover the crust with a pie shield... remember, do not use the aluminum foil when cooking as the foil breaks and you add alluminium to your food.

02 - Pour in the Sweetened Condensed Milk and mix well.

04 - Pour the Mixture into the Pie Crust

06 - Allow to cool then refrigerate for 2 hours to set up. 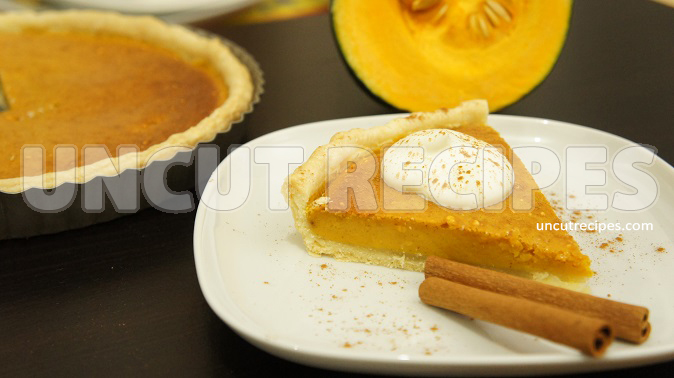 - If you cannot find Chinese Five Spices, you can make it yourself with: a small pinch each of ground star anise, ground cloves, and ground white pepper.