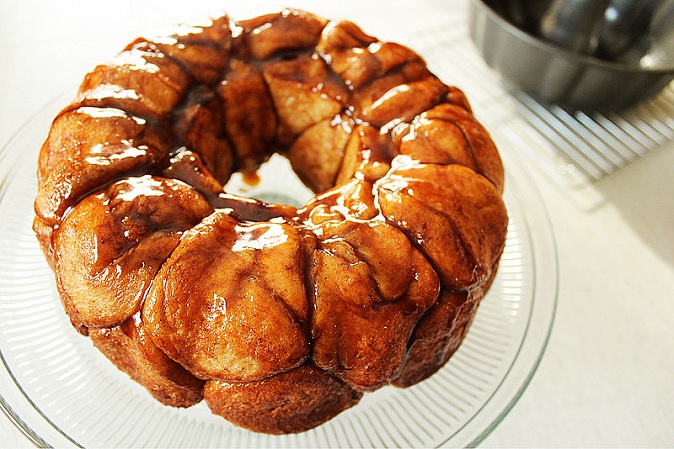 AMERICAN TRADITIONAL RECIPE: Seriously, I hardly have any words to describe the glorious goodness of Monkey Bread. And if you know me, you know it’s rare that I’m left speechless for a Cake. I actually love cakes but after eating them I usually have the runs. But this magical monkey bread doesn’t really need any words.

Monkey Bread is traditionally slathered with a lot of butter and sugar. And sometimes people pour sugary icing all over it, too. But caramel is one of those things where a little can go a long way.

The Monkey Bread was really lovely and I didn’t feel as guilty as I usually do when I’m pulling hunks and forkfuls of cake with this recipe. The caramel bath the dough bakes in takes you right to the edge, with just the right amount of sweetness, without going overboard.

The individual bites tastes like mini sticky buns without the overwhelming tooth-aching sweetness that most have. It really makes a great accompaniment to my afternoon coffee, which I took without sugar.

The origin of the term "monkey bread" is uncertain. One possible etymology is the bread's resemblance to the fruit of the monkey puzzle tree.

Recipes for the bread first appeared in American women's magazines and community cookbooks in the 1950s, but the dish is still virtually unknown outside the United States. The bread is made with pieces of sweet yeast dough (often frozen), which are baked in a cake pan at high heat after first being individually covered in melted butter, cinnamon, sugar, and chopped pecans.

It is traditionally served hot so that the baked segments can be easily torn away with the fingers and eaten by hand.

02 - Meanwhile, cut the Butter in little pieces to soften it.

09 - Shape each piece into a ball and allow to raise for 2 hours in a warm place, covered loosely with plastic wrap.

10 - In a saucepan, over medium heat, combine Butter, Honey, Brown Sugar, Granulated Sugar, Cinnamon, Powdered Ginger, Nutmeg and Salt. Mix until everything has melted and the Caramel is homogenous. Remove from the heat.

11 - Divide the Caramel in 4 portions and set aside.

12 - Grease a loaf pan with Butter and pour 1 protion of Caramel Sauce into the bottom of the pan.

14 - In a large bowl combine 1 portion of Caramel with the Dough Balls.

17 - Place the pan on a try to avoid overflowing Caramel dirting the oven, and place the tray on the center rack.

18 - Bake for about 50 minutes or until the top crust has Browned.

- If the Caramel has cooled too much you can re-heat the Monkey Bread for few minutes.

- Best if consumed the same day,or kept in fridge for 3.

- Use brown sugar rather than granulated. It becomes more caramelized, and the sauce less-saucy. Use brown sugar in the topping a stickier glaze, white sugar for a more 'saucy' result. If using white/granulated sugar, you may need to increase the baking time of 10/15 minutes.

- You can also add a touch of honey to the dough. You can use the honey, or sugar, in the dough. Totally up to you.