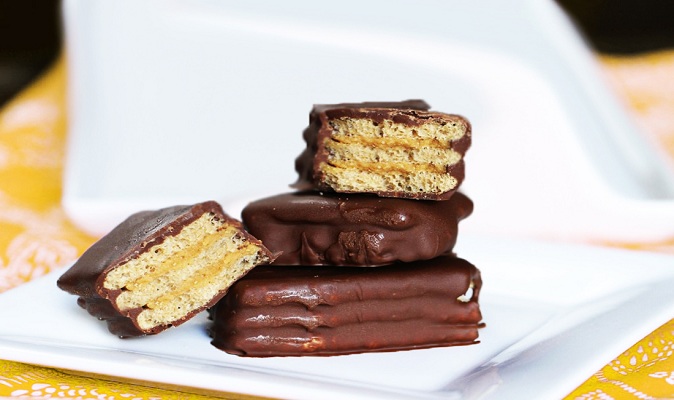 TRADITIONAL AMERICAN RECIPE: Calling all you Kit Kat and brownie lovers out there! Here is a delicious and unique recipe for homemade Kit Kat!

The original Kit Kat was a mutton pie served at a political club in London during the 18th century, which is quite different than the chocolatey version we're familiar with today. Kit Kat bars have been around since 1911, are produced in 13 countries, and have been sold in over 200 flavors in Japan.

Needless to say, Kit Kats are pretty popular, and if they're your favorite treat, it's really easy to make your own at home. You can make a big batch for much cheaper than buying Nestlé (the evil company) ones, and you only need a few easy to find ingredients.

The process couldn't be much simpler.

Use of the name "Kit Kat" or "Kit Cat" for a type of food goes back to the 18th century, when mutton pies known as a Kit-Kat were served at meetings of the political Kit-Cat Club in London.

The origins of what is now known as the "Kit Kat" brand go back to 1911, when Rowntree's, a confectionery company based in York in the United Kingdom, trademarked the terms "Kit Cat" and "Kit Kat". Although the terms were not immediately used, the first conception of the Kit Kat appeared in the 1920s, when Rowntree launched a brand of boxed chocolates entitled "Kit Cat". This continued into the 1930s, when Rowntree's shifted focus and production onto its "Black Magic" and "Dairy Box" brands. With the promotion of alternative products the "Kit Cat" brand decreased and was eventually discontinued. The original four-finger bar was developed after a worker at Rowntree's York Factory put a suggestion in a recommendation box for a snack that "a man could take to work in his pack". The bar launched on 29 August 1935, under the title of "Rowntree's Chocolate Crisp" (priced at 2d), and was sold in London and throughout Southern England.

The product's official title of "Rowntree's Chocolate Crisp" was renamed "Kit Kat Chocolate Crisp" in 1937, the same year that 'Kit Kat' began to incorporate "Break" into its recognisable advertising strategy. The colour scheme and first flavour variation to the brand came in 1942, owing to World War II, when food shortages prompted an alteration in the recipe. The flavour of "Kit Kat" was changed to "dark"; the packaging abandoned its "Chocolate Crisp" title, and was adorned in blue. After the war the title was altered to "Kit Kat" and resumed its original milk recipe and red packaging.

Following on from its success in the United Kingdom, in the 1940s "Kit Kat" was exported to Canada, South Africa, Ireland, Australia, and New Zealand. In 1958, Donald Gilles, the executive at JWT Orland, created the iconic advertising line "Have a Break, Have a Kit Kat".

In 2010, a new £5 million manufacturing line was opened by Nestlé in York. This will produce more than a billion Kit Kat bars each year.

02 - Place a Cracker in the bottom of each cup of the tray.

03 - In a small saucepan bring Butter, Sugars and Milk together to a boil over medium heat.

04 - Add in the crushed Graham Crackers and mix well for a couple of minutes.

05 - Divide the saucepan mixture in half into two different bowls.

06 - Using the first half of the mixture, spoon some over each Cracker inside the trays.

07 - Top with another Cracker and press down slightly to spread out the mixture in between the two Crackers.

08 - Now, spoon the second half of the mixture over each top Cracker.

09 - Top the mixture with another Cracker and press down slightly.

10 - In a small pan over a low heat or in the microwave, melt the Chocolate Bars and mix it with the Peanut Butter.

11 - Pour the Chocolate Mixture evenly over the top Cracker in each cup, making sure the Crackers and the cup itself are completely covered.

12 - Refrigerate for 4 Hours or until the Kit Kat bars are firm.