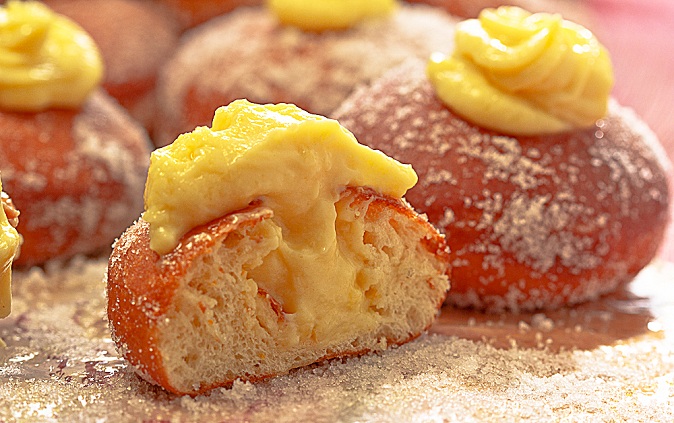 TRADITIONAL AMERICAN RECIPE: The filled doughnut is a flattened sphere injected with fruit preserves, cream, custard, or other sweet fillings, and often dipped into powdered sugar or topped off with frosting.

National Doughnut Day, also known as National Donut Day, celebrated in the United States of America, is on the first Friday of June each year, succeeding the Doughnut Day event created by The Salvation Army in 1938 to honor those of their members who served doughnuts to soldiers during World War I.

These are reported to have been an "instant hit", and "soon many soldiers were visiting The Salvation Army huts". Margaret Sheldon wrote of one busy day: "Today I made 22 pies, 300 doughnuts, 700 cups of coffee."

Soon, the women who did this work became known by the servicemen as "Doughnut Dollies".

02 - Dissolve the Yeast in some Milk taken with an espresso cup from the amount given.

03 - Whisk the Eggs and add them to the remaining milk. Set aside.

05 - Add the bowl with Milk and Eggs you have set aside earlier into the Flour mixture nd knead for 5 minutes by hand, or with an electric mixer.

06 - Now, combine the Yeast-Milk mixture to the Dough and knead for other 3 minutes.

07 - Add the butter ( little by little) without stopping kneading, until you will end with a smooth, soft an dry Dough.

08 - Place the Dough in a bowl. Cover with cling film and leave it to stand in the oven ( switched off )
for 45 minutes, or until the Dough has doubled in size. 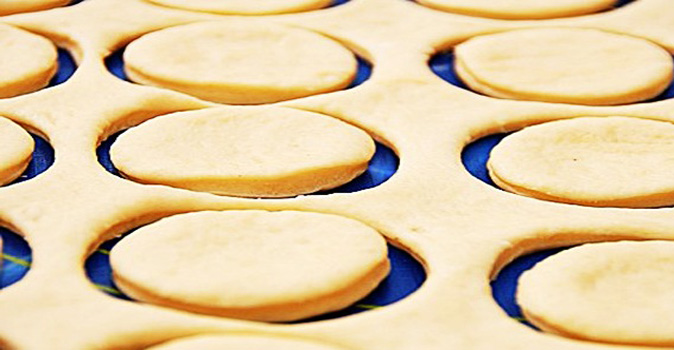 11 - Place all the discs ( or balls ) on a floured oven tray and let them double in size for 1 hour.

13 - Gently lower the Dough Discs ( or Balls ) two or three at a time into the hot oil for 3 - 5 minutes or until golden-brown.

14 - Remove them from the hot oil with a slotted spoon and drain on some kitchen paper.

15 - Roll the hot Doughnuts in the Sugar.

16 - Using a piping bag or a syringe, fill the Doughnuts with Custard Cream ( Recipe Here ).

- You can serve the Doughnuts worm or fridge-cold.

- Save them in the fridge for a couple of days, but double check the expiring date of the Eggs and all the other ingredients.