TRADITIONAL AMERICAN RECIPE: While custard may refer to a wide variety of thickened dishes, technically (and in French cookery) the word custard (crème or more precisely crème moulée, refers only to an egg-thickened custard.

It can be American, French or Italian. Basically every country has its own recipe and believe to be its creator. Even the Chinese believe so... but let's be honest, no-one believes them! :P

When starch is added, the result is called pastry cream or confectioners' custard, made with a combination of milk or cream, egg yolks, fine sugar, flour or some other starch, and usually a flavoring such as vanilla, chocolate, or lemon.

Crème pâtissière is a key ingredient in many French desserts including mille-feuille (or Napoleons) and filled tarts.

It is also used in Italian pastry and sometimes in Boston cream pie.

Although egg thickens the custard, the effect is minimal, with the majority of thickening resulting from starch. Corn flour or flour thicken at 100 °C and as such many recipes instruct the pastry cream to be boiled. In a traditional custard such as a crème anglaise, where egg is used alone as a thickener, boiling results in the over cooking and subsequent 'curdling' of the custard; however, in a pastry cream, starch prevents this. Once cooled, the amount of starch in pastry cream 'sets' the cream and requires it to be beaten or whipped before use.

When gelatin is added, it is known as crème anglaise collée. When starch is used alone as a thickener (without eggs), the result is a blancmange.

In the United Kingdom, custard has various traditional recipes some thickened principally with cornflour (cornstarch) rather than the egg component, others involving regular flour.

After the custard has thickened, it may be mixed with other ingredients: mixed with stiffly beaten egg whites and gelatin, it is chiboust cream; mixed with whipped cream, it is crème légère.

A quiche is a savoury custard tart. Some kinds of timbale or vegetable loaf are made of a custard base mixed with chopped savoury ingredients. Custard royale is a thick custard cut into decorative shapes and used to garnish soup, stew or broth. In German it is known as Eierstich and is used as a garnish in German Wedding Soup (Hochzeitssuppe).

Chawanmushi is a Japanese savoury custard, steamed and served in a small bowl or on a saucer. Chinese steamed egg is a similar but larger savoury egg dish.

Custard may also be used as a top layer in gratins, such as the South African bobotie and many Balkan versions of moussaka.

01 - Place half of the Milk into a pot along with the Lemon Zest, and let it nearly boil for few minutes.

02 - Turn off the heat and let the Milk cool and absorb the aroma.

03 - Combine the Egg Yolks and Sugar into a bowl. Mix well the Eggs and the Sugar.

04 - Beat the Flour into the Egg mix, and add the other half of the Milk. Mix everything the best you can till you manage to break all the lumps.

05 - Remove the Lemon Zest from the Milk.

06 - And now you can combine the Egg/Sugar mix to the Milk.

07 - Cook everything on a very low heat until the Custard thickens. Keep stirring the cream for 5-10 minutes or till you've reached the proper consistency.

08 - Place the Custard in a bowl and cover it with cling film. After it has cooled, leave it in the fridge 1 extra hour. 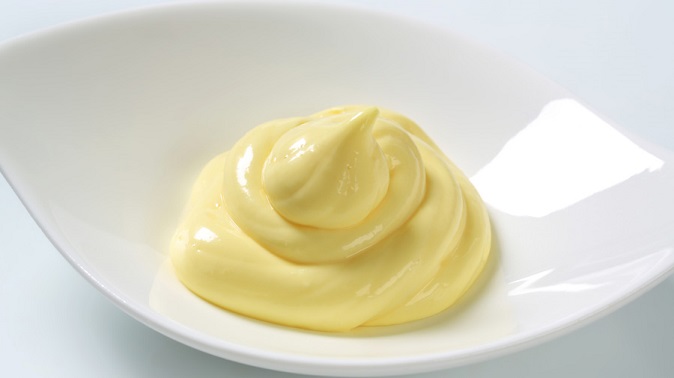 - If you don't wish to use the Lemon, you can alternately use 1 Vanilla Pod. Replace the Lemon with the Vanilla Pod and follow all the steps as written.

- Some people add a pinch of Cinnamon at the end, or a Cinnamon Stick at direction number 2.