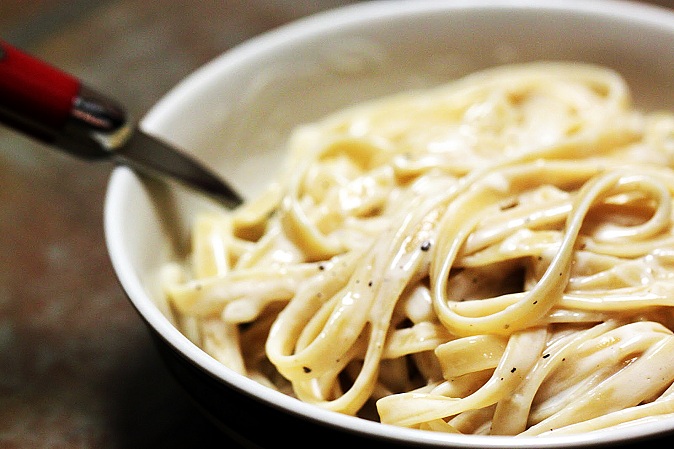 TRADITIONAL AMERICAN RECIPE: Fettuccine Alfredo. There’s nothing good about it, except for how good it is. This recipe is evil, ridiculous, and an affront to good sense…but look at the bright side: one recipe will feed over 800 people!

Fettuccine Alfredo is a pasta dish made from fettuccine tossed with Parmesan cheese and butter. As the cheese melts, it emulsifies the liquids to form a smooth and rich coating on the pasta.

The term is a synonym for pasta with butter and Parmesan cheese, one of the oldest and simplest ways to prepare pasta.

The dish was named after Alfredo Di Lelio, a restaurateur who opened and operated restaurants in Rome, Italy, throughout the early to mid 20th century.

Fettuccine with butter and Parmesan cheese was first mentioned in the 15th-century cookbook, Libro de arte coquinaria, written by Martino da Como, a northern Italian cook active in Rome.[3] The name of the dish, "Maccheroni romaneschi" (English: Maccheroni the Roman way), betrays its Roman origin. The dish soon became a staple food in Italy and abroad.

Alfredo Di Lelio invented the “fettuccine al triplo burro” (later named "fettuccine all'Alfredo" or "fettuccine Alfredo") in 1908 in a restaurant run by his mother Angelina in Piazza Rosa in Rome (the Piazza disappeared in 1910 following the construction of the Galleria Colonna/Sordi).

Alfredo di Lelio later opened his own restaurant “Alfredo” in 1914 in a street in central Rome. From this local restaurant the fame of “fettuccine all’Alfredo” spread, first in Rome and then to other countries. In 1943, during the war, Di Lelio sold the restaurant to others outside his family. In 1950, with his son Armando, Alfredo Di Lelio reopened his restaurant in Piazza Augusto Imperatore n.30 "Il Vero Alfredo" (“Alfredo di Roma”), which is now managed by his niece Ines Di Lelio, along with the famous “gold cutlery” donated in 1927 by the American actors Mary Pickford and Douglas Fairbanks (in gratitude for Alfredo’s hospitality).

01 - Cook the Fettuccine Pasta according to package directions, in salted water.

02 - With a glass, save a little bit of water from the pot you are boiling the Fettuccine. Set aside.

03 - Meanwhile, in a large saucepan ( over low heat ) melt the Butter in the water you have saved earlier and add the Double Cream. Cook for 3 minutes.

04 - Cook the Fettuccine al dente, and move them into the saucepan.

06 - Finish to cook the Fettuccine in the saucepan until most of the water has evaporated, leaving a little sauce behind.