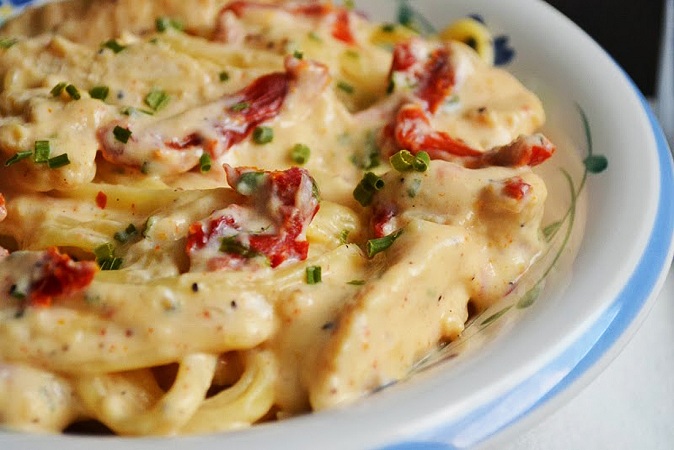 TRADITIONAL AMERICAN RECIPE: What makes this pasta sauce so luscious is one word: reduction. Reducing a sauce evaporates liquid and concentrates the flavors.

This recipes includes two different reductions. When I go out to eat at an Italian restaurant, nothing bugs me more than ordering a crème based sauce and what shows up is so much crème that it feels like I’m drinking the pasta. Because of the reduction in this recipe, the cream just hugs the pasta.

Cajun chicken pasta is better known as Louisiana Chicken Pasta at the Cheesecake Factory. Instead of breading the chicken and frying it, you should toss it in cajun seasonings and sautéing it in the pan before adding in the other ingredients. This not only makes the recipe much, much lighter

Cajun cuisine is a style of cooking named for the French-speaking Acadian people deported by the British from Acadia in Canada to the Acadiana region of Louisiana. It is what could be called a rustic cuisine; locally available ingredients predominate and preparation is simple.

Around 1755, Acadians were forced out of their settlements by the British, and as a result, they migrated in 1755 in what was called le Grand Dérangement, eventually settling in Southern Louisiana. Due to the extreme change in climate, Acadians were unable to cook their original dishes. Soon, their former culinary traditions were lost, and so, these other meals developed to become what is now considered classic Cajun cuisine traditions (not to be confused with the more modern concept associated with Prudhomme's style).

Up through the 20th century, the meals were not elaborate but instead, rather basic. The public's false perception of "Cajun" cuisine was based on Prudhomme's style of Cajun cooking, which was spicy, flavorful, and not true to the classic form of the cuisine.
Cajun and Creole label have been mistaken to be the same, but the origins of Creole cooking began in New Orleans, and Cajun cooking came 40 years after the establishment of New Orleans down south on the bayou.

Today, most restaurants serve dishes that consist of Cajun styles, which Paul Prudhomme dubbed "Louisiana cooking". In home-cooking, these individual styles are still kept separate.
However, there are fewer and fewer people cooking the classic Cajun dishes that would have been eaten by the original settlers.

01 - Start boiling some salted water in a large pot, and cook the Pasta.

02 - In a separate small pot, boil the Chicken for 3 minutes.

03 - While the water boils and the Pasta cooks, heat Oil in a large pan. Saute Garlic and Red Pepper Flakes until Garlic is browned and fragrant. Do not burned.

05 - Slowly, whisk in the Flour and add the Chicken and stir over low heat for 10-15 minutes, or until the mixture is slightly thickened.

06 - This should be the best time to start cooking the Pasta in the large pot.

07 - Back to the pan, stir in Parmesan Cheese until melted and smooth.

09 - Add the Cajun Seasoning and the Sun Dried Tomatoes.

10 - Drain the Pasta al dente, saving just half cup of Water from the pot where the Pasta was cooking, and combine everything with the Sauce. Stir well.