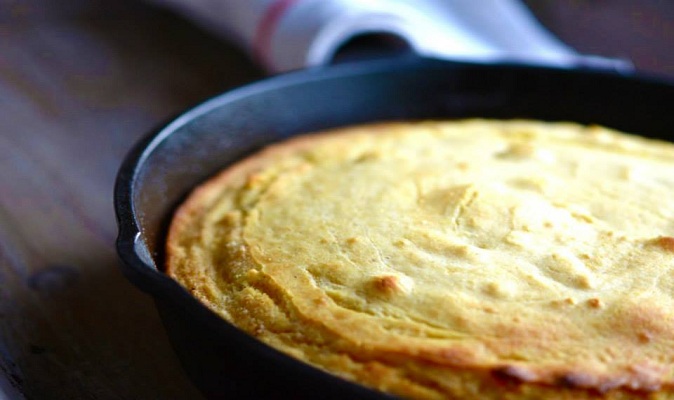 TRADITIONAL AMERICAN RECIPE: Native Americans were using ground corn (maize) for food thousands of years before European explorers arrived in the New World. Now that you know this... let's go straight to this recipe.

Skillet cornbread is a southern staple. Baked in a preheated, sizzling hot oiled cast iron skillet, it produces a beautiful crunchy crust on the bottom, and that is what makes it so unique. But cornbread in The South can certainly be cause for debate, that's for sure.

The truth is ... the real secret that makes authentic southern cornbread, is that crusty crunch on the outside that results from fat in the bottom of a screaming hot cast iron skillet. Believe it or not, it's less about the recipe, or whether you use white or yellow cornmeal, flour, or sugar in your cornbread, and much more about the method itself.

Plenty of Southerners have been using a little bit of flour and even a pinch of sugar in their cornbread since the beginning of cornbread in a skillet. I know some other Southerners don't want to accept that, but from my research, it is true.

Flour adds body and corn just loves sugar and adding just a bit helps to take the edge off of that raw cornmeal flavor. The key there are the words "a little bit." Yankee cornbread is heavy in both flour and sugar, making it very sweet and cake-like. Not a thing wrong with that, but it's not Southern cornbread. If you put just a bit of flour and/or sugar in your Southern cornbread, guess what? It certainly is still Southern cornbread. In fact, if you're from the part of the Deep South where I am from, you likely use a little flour, a pinch of sugar, and only yellow cornmeal - not white - so it's more of a regional thing really as to whether you use white or yellow.

And, speaking of regional, if you are lucky enough to get your hands easily on some true, stone ground cornmeal - well, then all bets are off because to me, that's what makes up real southern cornbread.

Oddly, even some Southerners still don't quite understand these regional differences in certain areas of The South and still think their way is the only right way. I still get told all the time that I'm not doing something "right" here on my own website. In all fairness though, I get it, because truth is, from what I've heard, Southerner people don't usually venture all that far from that place where we were born.

Other ingredients such as pork rinds are sometimes used. Cornbread is occasionally crumbled and served with cold milk or clabber (buttermilk), similar to cold cereal. In Texas, the Mexican influence has spawned a hearty cornbread made with fresh or creamed corn kernels and jalapeño peppers and topped with shredded cheese. Cornbread is typically eaten with molasses in the southern states and honey in the northern states.

Feel free to play with this recipe to turn it into your ideal cornbread. For basic cornbread with extraordinary texture and flavor, just add fresh vegetables.

Whatever you do, don’t reduce the amount of butter. I firmly believe that cornbread, like brownies, should contain high quality ingredients, exceptional flavor and plenty of butter.

02 - In a small skillet, melt butter over medium heat. After butter has melted, let continue to cook, stirring frequently, until butter has browned, about 3 minutes. Transfer to cake pan.

03 - In a small bowl, whisk together eggs and milk.

04 - In a large bowl, whisk together cornmeal, flour, sugar, baking powder, and salt. Stir in egg mixture until combined.

05 - Pour batter into pan and smooth out the top. Bake until golden and a cake tester comes out clean, about 25 minutes.