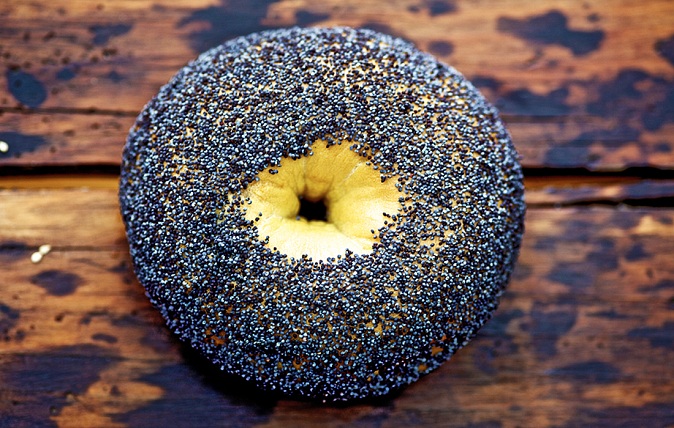 TRADITIONAL AMERICAN RECIPE: Bagels are awesome. Who's with me?
When you make them from scratch and they come from the oven all warm and steamy, a knob of butter will do just fine, but poppy seeds just make the classic, awesome.

The dough for bagels is similar to bread at its core: water, yeast, flour and sometimes salt.

The big difference between bagels and bread is that they are poached in boiling water after they are rolled and shaped, but before they hit the oven. This causes the starch at the surface to gelantinize, which is the technical term for causing the starch to absorb water and set. This keeps the surface moist so that the bagels can expand during baking, but most importantly it creates a thick, chewy and shiny crust.
You might wanna try this trick.

Pretzels are made by a similar method except that the water is alkalized to promote a dark brown colour. This is done through the simple addition of baking soda to the poaching water.

The lack of salt in the dough prevents ultimate gluten development so the resulting dough is shorter and has a flakier texture. Egg helps to create a more tender texture thanks to natural emulsifiers in egg yolk, and the added protein helps to provide a bit of structure.

New York-style bagels are (not surprisingly) bigger, puffier, spongier, chewier and made with salt. They come across more moist and doughy than their Canadian counterpart.

01 - Combine Warm Water, Yeast and the Sugar. Set aside for 5 minutes or until frothy.

02 - In another bowl mix the Flour and Salt and make a well in the centre.

03 - Pour the Yeast mixture into the well and stir until well combined.

04 - Then a dough starts forming, move to a floured surface and knead it for 10 minutes or until dough is smooth and elastic.

05 - Leave the dough in the bowl, in a warm room, and cover it with some plastic wrap for 30 minutes, or until the dough rises by half.

09 - Divide the dough into 12 portions. Roll each portion into a ball. Push a lightly floured finger through the middle of the ball to create a hole and place on the oiled tray and set aside for 10 minutes to rise slightly.

11 - Whisk the Egg Yolk and Milk together in a small bowl. Brush the mixture over each bagel.

14 - Remove from oven and set aside to cool. Serve.